Since 2012 The Substation and the Victorian College of the Arts (VCA) have worked together to present Future Now, an annual award exhibition of VCA Honours graduates. Showcasing a range of artistic practice by seven of the newest talents in Melbourne’s contemporary art scene each year, Future Now tours regional Victoria, connecting artists and communities across the State.

The seven artists, selected by The Substation’s visual art curator, Will Foster, present new work throughout the centre’s expansive gallery spaces. This presents a significant opportunity to participate in one of Melbourne’s most dynamic contemporary art programs. The exhibition is then restaged at three regional art spaces, allowing the artists to continue developing their work, and reshape the show at each venue.

Alex Purchase constructs architectural spaces that create convincing portals into alternate realities within the gallery space. With reference to theatre, cinema and virtual reality, her work explores the psychological effects of our built environments and the construction of atmosphere, acknowledging the interplay between fantasy and reality. 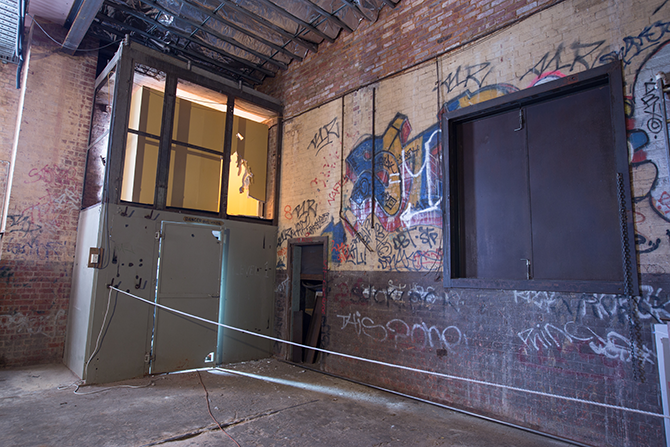 What artistic references or attitudes are important for your work?

A.P. I am interested in the work of ‘total-installationists’ such as, Mike Nelson, Gregor Schneider, Robert Kusmirowski, and others. Science fiction seems to have had a re-emergence recently, authors like JG Ballard and Philip K. Dick are getting a lot of airtime which is exciting but also I watch a lot of horror films (horror is one genre where set design is relied on quite heavily to create atmosphere) and I loved stories about explorers and detectives when I was a bit younger; although a lot of them have dated quite badly. I’m still playing videogames and I can’t emphasise enough how much they should not be overlooked in terms of cultural influence.

Christina Hayes’ paintings reflect her work as a theatre designer and her ongoing collaborative practice with The Sisters Hayes. Family drama and shared histories relating to place and identity weave their way into Hayes’s large-scale paintings that involve storytelling, play-acting and dress-ups. 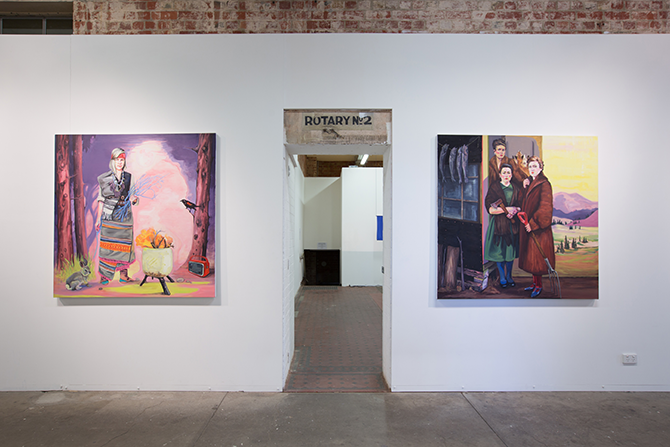 Can you tell me about your process; do you start with a particular plan in mind or do you develop work intuitively?

C.H. For me, a painting starts with a bit of a story, often something I heard or knew in the context of my family and cultural heritage. So it begins in my head and I think it’s a pretty intuitive process from there. This part of the process is quite private but it isn’t long before I start involving other people as well – either as listeners, character interpreters or models, assistants and sometimes photographers. I like working with people, and also work in theatre, so I’ve come to see the photo shoot as a sort of production or staged tableaux vivant. I welcome a lot of input at this stage from the model as I am curious to how they pose or physically express the character I’ve told them about. When I’m alone in the studio I use a projector to collage images and draw up a scene and draw it directly onto the canvas with paint. There is a plan after the photo shoot to develop a scene but it isn’t until I am painting that I know if it’s working. 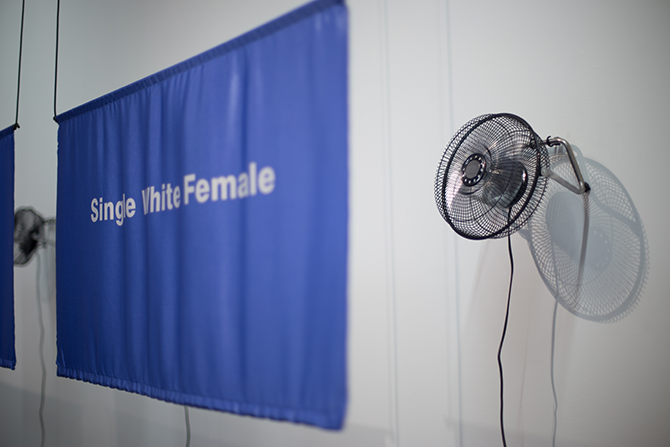 Do you have any particular expectations of the public when they see your work?

D.P. I wouldn’t say that I have particular expectations of the public. For the most part my work is very personal. When it comes to exhibiting it’s often that I have magnified something that’s been on my mind; magnified it in the sense that it has gone from a note somewhere to being a piece of work that may be able to communicate an idea to an audience. But I really don’t expect the audience to interpret my work exactly as I had the original thought – in fact, the original thought has most likely been altered by the time of the exhibition, so it really is open ended.

Daniel Belfield’s recent work in video and installation manipulates logic to create alternative systems of time. Poetic and laced with humour, his works draw attention to our attempts to rationalise and index time while highlighting the inherent absurdities and inaccuracies of this process. 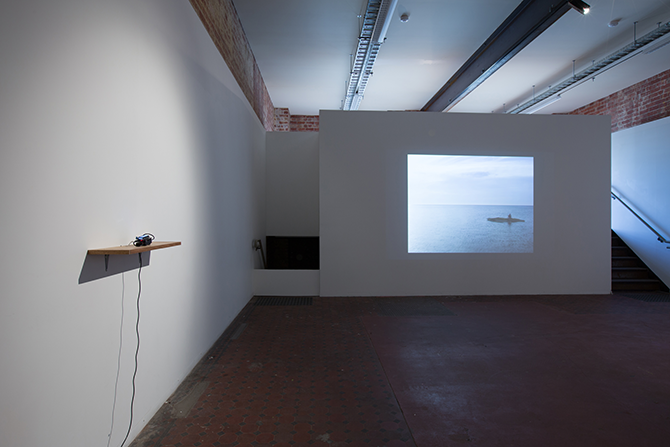 For many artists the exhibition space is the last workspace where they make final decisions. How important is the gallery space and installation process for you?

D.B. I tend to have a particular space in mind when I begin to think of a project and its outcome. While I was studying this would usually be limited by the size or conventions of the spaces available. I believe the existing features of a space alter the visual language you’re trying to communicate, and reorder some of its grammar. With most white-cube spaces this doesn’t pose much of a problem due to their inherent homogeneity, but in buildings with a bit more personality – like The Substation – I think this is a consideration most artists should, and often do, take into account.

Isabelle Sully’s practice relies on the notion of transformations and often explores the translation between visual and verbal language. Her work in Future Now emerges from the memory of a lost artwork that is remade and reconfigured to fit the different sites of the exhibition tour. 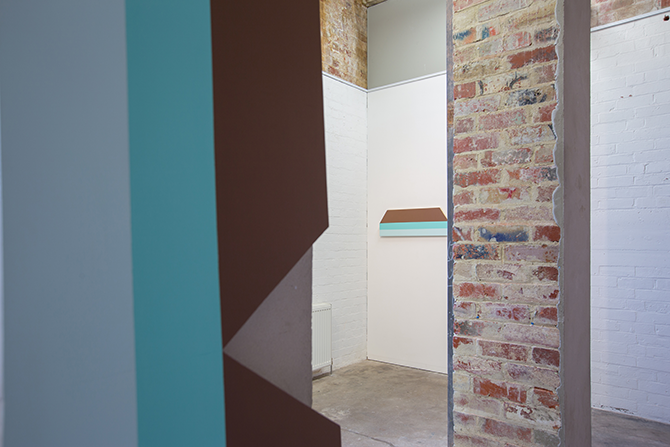 Isabelle Sully, (front) This Time Around (back) Take Two 2014 (details)

What has been the biggest change for your practice since graduating?

I.S. Probably the feeling that I actually do have a practice now – that would be a start! I often questioned what I was doing throughout art school, and always had the framework of an education or an institution to make me feel as though it was something I didn’t have to know the answer to yet. Or moreover, shouldn’t know the answer to. Of course, I still question the relevance of art (etcetera to the nth degree) but I feel much more comfortable thinking of myself as an artist now. I suppose this is because I have realised that, for me, it is as much as way of living as it is a way of working. So I have found this happy balance between working for money and working for free; one that allows me to think of being an artist as something I do, rather than something I am – a part of the main. 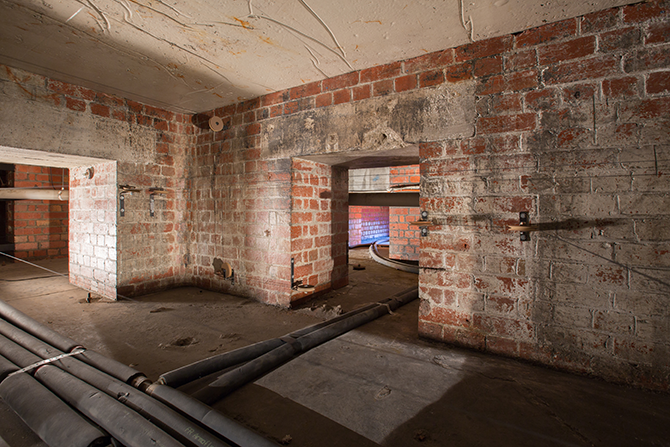 Do you have an ideal place or context to work in?

S.D. I carry my visual diary with me everywhere. It’s taken years to develop this discipline but it’s the core of my practice. It’s during the ‘in-between’ moments as I course through my day that significant observations and realisations occur. Unless I’m specifically drawing or painting I don’t benefit from being in my studio for long periods, unless I’m working on a particular project in which case I’ll barely leave. There is one café I frequent that ceaselessly delivers generative conversation with the stranger next to me. People’s experiences and their specific body of knowledge, especially engineers, historians, geologists and scientists, fascinate me. I prefer to venture outdoors and always accept invitations to be shown through a flour mill or laboratory for example, exposing myself to the inner workings of what happens behind the scenes. I’ll invest in these environments and conversations for months at a time. Returning to my studio I’ll look for interesting patterns or cross-pollinations whilst experimenting with new mediums. 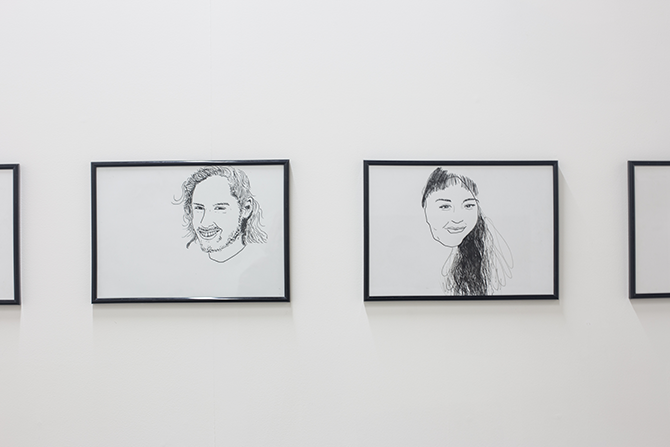 What music are you listening to now?

K.P. Right now I’m listening to a podcast, but I listen to a lot of either folk music, like Bob Dylan and Paul Kelly, or rap music, like Eminem and Kanye. I guess the reason I really like folk and rap is because both styles of songwriting are usually very clever with words and wordplay. I’m going to Italy very soon so I’ve also been listening to a lot of “Con te partiro” and the soundtrack to The Godfather.

Photography by Kirsty Milliken
For more info on Future Now and the full interviews – cargocollective.com/futurenow

One afternoon you rock up to your hospo job with a hangover, only to find that it’s closed its doors indefinitely and suddenly you’re unemployed again. With fuck all in your savings account, you decide to drown … END_OF_DOCUMENT_TOKEN_TO_BE_REPLACED

This year the festival will stage an online version of the event, accompanied by a program of online seminars and events throughout the Festival period. The festival will then work to present a scaled-back physical … END_OF_DOCUMENT_TOKEN_TO_BE_REPLACED

And just as the zombie apocalypse kicked in, I quit my job. I’ll tell you why later in the piece. So, now I find myself unemployed at 50, in the middle of a pandemic. This is … END_OF_DOCUMENT_TOKEN_TO_BE_REPLACED

Art and technology are by definition divorced from nature. Art is the product of human creativity and technique; it is an object, image, sound or movement that exists as a unique manifestation of our imagination. Technology comes … END_OF_DOCUMENT_TOKEN_TO_BE_REPLACED

This inaugural festival will see over 100 street artists and musicians take over Melbourne’s iconic multi-level warehouse, The Facility, transforming it from top to bottom with paintings, … END_OF_DOCUMENT_TOKEN_TO_BE_REPLACED

Rolled into Alice Springs, literally: a strong head wind burnt up all the petrol. As the sun set in the west (I presume it was the west because that’s where the sun sets where I … END_OF_DOCUMENT_TOKEN_TO_BE_REPLACED

Have you had any lessons? The enquiry came from a woman and her friend who had been loitering behind me as I painted en plein air in a local park. It seemed a particularly stupid question, especially … END_OF_DOCUMENT_TOKEN_TO_BE_REPLACED