Rod McRae’s touring exhibition Wunderkammer: The Cabinet of Wonders, a menagerie of striking and potentially disturbing taxidermy sculptures, makes its first local appearance at Deakin University Art Gallery (until 5 April, 2014). The works have already elicited some rather unruly audience responses on campus, which has served to underline certain points the artist would like viewers to consider about our often contentious interactions with other species.

Originally installed in the Library art space as a ‘teaser’ to promote the show, Born Free (2013), of a lion reclining on a king-size bed, became a matter of concern to library staff on the second day of its display, and who then suggested that it be removed. Despite being roped off with bollards, and with clear signage not to handle the work, students were climbing over the barrier and lying on the bed. Unable to adequately supervise the exhibit, the decision was taken to relocate the work to the main gallery, at the loss of another piece from the show in order to accommodate it. The harassment of the long-deceased beast continued even after that precautionary measure, with another visitor posing on the bed clutching his camera before gallery staff could intervene. Perhaps a few cattle-prods might be a viable option to help attendants control those self-absorbed patrons who have little respect for the work itself, and even less thought towards art preservation?

All this was rather frustrating for McRae, who had already returned to Sydney where he has been Head Teacher of the Events, Design and Illustration (EDI) section at the Design Centre Enmore, Sydney TAFE for the past twenty years. “If the work was indeed creating such a ruckus, it begs all sorts of questions about the way art is viewed by this generation, as a play-thing and entertainment, even when the work is displayed in a designated art space. This behaviour is also a product of the obsession with social media and the ‘selfie'”, he contends. “However, it is also true that my animals do scream ‘touch me!’. My contention, that taxidermy communicates to people more intensely than sculpted animals rendered in stone, bronze, wood, or resin, would seem to be borne out by these incidents. Using the ‘real thing’ creates art that is both authentic and empathetic”.

As McRae explains, his intention with the work was to subvert expectations. “[Born Free] explores notions of the ‘wild’ verses subjugation and domestication … When making this work I was well aware that Lions and other big cats are traditionally posed in taxidermy to accentuate their fierce and powerful attributes, as trophies to the hunt- always rewarding the hunter. This pose does quite the opposite, reducing the animal to a playful and passive individual. I referenced the behaviour of my cat in determining the final pose, I think its passivity is very disarming”.

Born in New Zealand and arriving in Australia in 1984, McRae enjoyed a highly successful career in children’s publishing (1981-92), as both an author and illustrator of over fifty titles, before turning his attention to photography. For the past nine years he has been exploring sculpture and installation art, concentrating on conservation and a variety of issues raised by human interactions with the natural world. “It is true that the strong narrative themes in my installation works for Wunderkammer owe a great deal to my earlier work in children’s books … and my interest in environmental issues which culminated in one of my last published titles, Cry Me A River (1991). My process varies: sometimes it starts with an article in the paper, or with the discovery of a displaced mounted creature on eBay, other times with the offer of a skin with an interesting history. My process always starts with research and rough drawings to flesh out the idea until it can tell its own clear story!”

As with other recognised artists who work within this sometimes emotive medium, McRae is concerned about the erroneous notion that he somehow has animal subjects killed specifically to facilitate his practice; an idea as morally repugnant as it is financially untenable. He attempts to source the animal components of his works as ethically as he possibly can; including pelts that are the result of death by natural causes, medical euthanasia, hunting, culling, food production, the by-products of trophy-taking, those that have been de-accessioned from public display, and/or vintage pieces that have been traded multiple times. “Each work touches on a different aspect of the human-animal relationship, including biodiversity, pollution, climate change, conservation and stewardship. Each work asks us to examine our responsibilities as fellow travelers on this planet”, McRae observes. 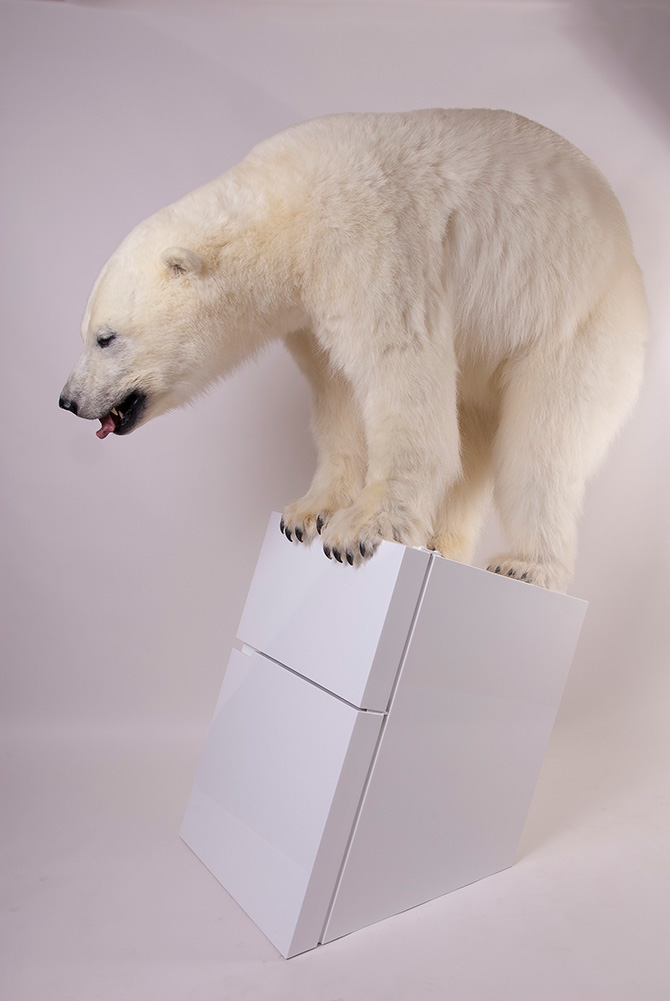 A finalist in the Wynne Prize, Crying Out Loud In the Age of Stupid (2010), depicts a taxidermied Polar bear perched precariously on top of a refrigerator, which itself mimics a bobbing chunk of melting sea ice. “In these complex times of environmental degradation, pollution and declining diversity, it seems almost impossible to balance the needs of human communities with that of non-human communities”, McRae laments. “The message is clear enough, the very mechanism human communities use to make ice…depletes natural ice formations through decades of CFC release and ozone damage. The Polar bear teeters on the edge of catastrophe as its habitat melts, its prey diminishes and starvation ensues”.

Operation Foxtrot (2010) addresses the prevalence of semi-feral foxes who have moved into populated areas to scavenge, and can be found trying their luck in people’s gardens and in any homes where the wily creatures can gain access. As the suburban sprawl expands ever further into agricultural and bush land, McRae asks us to ponder just whose population is out of control and who are, in fact, the vermin. “[Animals] mark out their territories in what we once referred to as ‘wilderness’, but this wilderness is increasingly described by words like ‘reserve’, ‘park’, ‘zone’ and ‘corridor'”, he says. For their scenic tour of potential new hunting grounds, the skulk have appropriated a shopping trolley, that other ubiquitous and migratory urban feature. Happy Father’s Day (2010) takes this idea further by putting the proverbial ‘fox in charge of the duckling house’, posing the predator as a benign custodian of his potential prey. Would such a polite and socialised urban-dweller really use the cuties clustering at his paws as chew-toys? 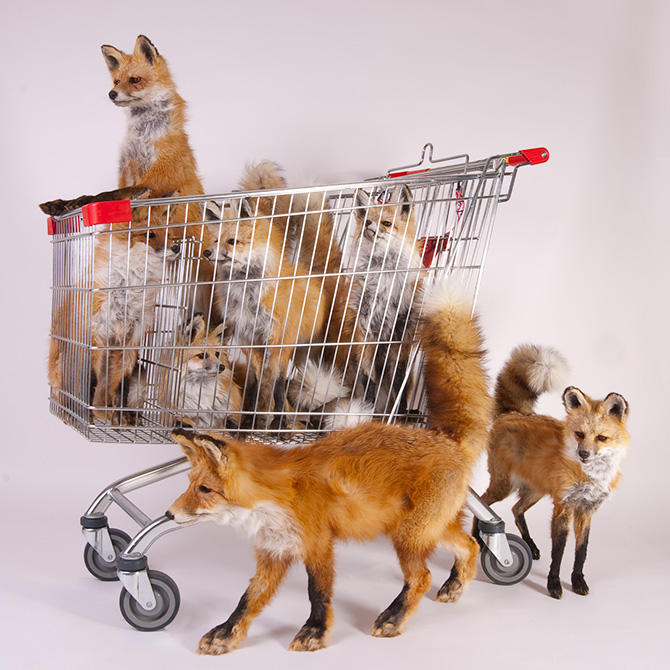 Several works highlight the multi-million dollar business that is Big Game hunting, predominantly in Africa, but also increasingly in America where herds of exotic animals have been established in private hunting parks to meet the ‘sporting needs’ of the local audience. Playing on the concept of a ‘movable feast’, Z is For Zebra (2010) features a cabinet on wheels containing an adult Burchell’s zebra. A southern subspecies of the plains zebra, it was named after English explorer and naturalist William John Burchell (1781-1863), and was thought to have been hunted to extinction as European settlement spread northward from the Cape to colonial southern Rhodesia. Blackboard walls surround the animal, one of which has a menu listing other species available to hunt, and the respective prices: ‘Hh is for Hunt, select your prey’. On the opposite panel, beneath replica automatic weapons a chalk scrawl reads, ‘It’s my God given right as a Christian man to hunt’. This echoes text from Genesis that the unfortunate creature stands on: ‘And God blessed them, and God said unto them, Be fruitful, and multiply, and replenish the earth, and subdue it: and have dominion over the fish of the sea, and over the fowl of the air, and over every living thing that moveth upon the earth’. (1:28)

McRae questions whether this ostensibly ‘God-given’ entitlement is really aiding in the survival of various species through population management and sustainability, as is claimed, or just another area where man’s caprice and arrogance is inflicting lasting damage. Are You My Mother? (2010), is titled in reference to the classic children’s book of the same name published in 1960 by P.D. Eastman (1909-86). Standing before three trophy heads mounted to the wall, an abandoned zebra foal grimly contemplates which of them might be its parent. Baboon Boy (2012), employs the pictorial maxim of the three wise monkeys, specifically Mizaru, who covers his eyes and sees no evil. Seated on a packing crate, the monkey holds a hand mirror with the words inscribed onto the back. He sees nothing at all though, his face is long gone, replaced by another mirror in which the viewer can see themselves- the representative of a callous and willfully blind species so closely related. Through these works, McRae encourages viewers to engage with the long- term consequences that culling, poaching and the trade in animal parts has on afflicted species: the displacement of social groups and the distortion of behavioural and survival patterns. 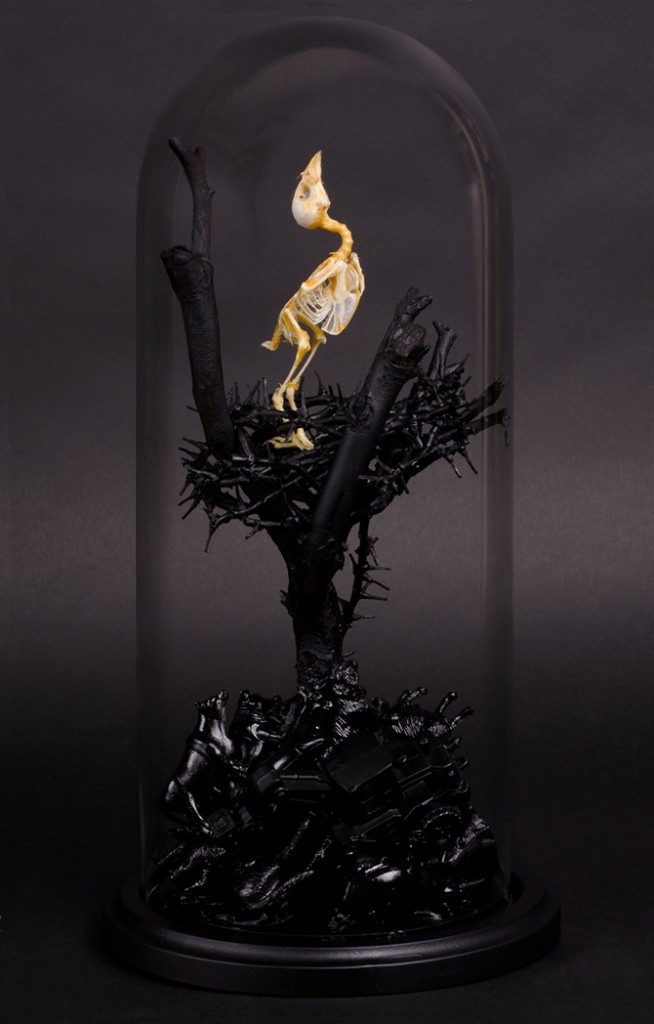 The exhibition continues to The Incinerator Gallery, Moonee Ponds: incineratorgallery.com.au

One afternoon you rock up to your hospo job with a hangover, only to find that it’s closed its doors indefinitely and suddenly you’re unemployed again. With fuck all in your savings account, you decide to drown … END_OF_DOCUMENT_TOKEN_TO_BE_REPLACED

This year the festival will stage an online version of the event, accompanied by a program of online seminars and events throughout the Festival period. The festival will then work to present a scaled-back physical … END_OF_DOCUMENT_TOKEN_TO_BE_REPLACED

And just as the zombie apocalypse kicked in, I quit my job. I’ll tell you why later in the piece. So, now I find myself unemployed at 50, in the middle of a pandemic. This is … END_OF_DOCUMENT_TOKEN_TO_BE_REPLACED

Art and technology are by definition divorced from nature. Art is the product of human creativity and technique; it is an object, image, sound or movement that exists as a unique manifestation of our imagination. Technology comes … END_OF_DOCUMENT_TOKEN_TO_BE_REPLACED

This inaugural festival will see over 100 street artists and musicians take over Melbourne’s iconic multi-level warehouse, The Facility, transforming it from top to bottom with paintings, … END_OF_DOCUMENT_TOKEN_TO_BE_REPLACED

Rolled into Alice Springs, literally: a strong head wind burnt up all the petrol. As the sun set in the west (I presume it was the west because that’s where the sun sets where I … END_OF_DOCUMENT_TOKEN_TO_BE_REPLACED

Have you had any lessons? The enquiry came from a woman and her friend who had been loitering behind me as I painted en plein air in a local park. It seemed a particularly stupid question, especially … END_OF_DOCUMENT_TOKEN_TO_BE_REPLACED