Previewed on the cover of last month’s issue, CJ Taylor’s exhibition even, still continues at Helen Gory Galerie (until 10 May). A lecturer in photography and new media at the South Australian School of Art, Architecture and Design, Taylor was recently awarded the Inaugural Adelaide Park Lands Art Prize (2014) for his work Denim (Pasha of the Park Lands) (2013).

Taylor commenced this ongoing series of still life works in 2011, influenced by the paintings of artist Pieter Claesz (c.1597-1660), an important exponent of the ontbijt or ‘dinner piece’ during the Dutch Golden Age. “It can be summed up in the title of a wonderful book called The Rhetoric of Perspective: Realism and Illusionism in Seventeenth-Century Dutch Still-Life Painting (2006) by Hanneke Grootenboer. For me it’s literally that, a visual conversation that rapidly descends into an argument about what it means to be a human being on the face of this planet. These paintings that we’ve come to know as ‘photo-realistic’ are anything but realistic (or photographic for that matter). They’re a wonderful evocation of realism, but with all the tricks and showmanship of a magician’s act”, Taylor contends. “My adopted rhetoric of Flemish perspective and symbols flicks the viewer’s perception between known and unknown laws of physics. This ‘flip-flopping’ between what looks real and what does not unsettles both ideas. In a contemporary photographic sense I see [these works] extending the visual conversation happening in the still life tableaux of [Australian photographers] Robyn Stacey and Marian Drew, among others”.

Each photography session is carefully planned months in advance in order to source props, decide on the produce to be used, and paint the forms. The completed works are then fused to acrylic glass so as to become less like a framed photograph and more like a 3D object. “Every tableau is just that, an arrangement in camera for the camera. Nothing is inserted after the event. They are, in effect, theatrical sets constructed to conform with that rhetoric of painterly perspective, and as such take an eon to get right. Everything must be built up to play to the visual distortions of the lens, camera and tricks of painting they’re alluding to. The shooting can be a bit gruelling and long (up to sixteen hours), particularly if fresh food is involved; although I do get to eat well”, quips Taylor. 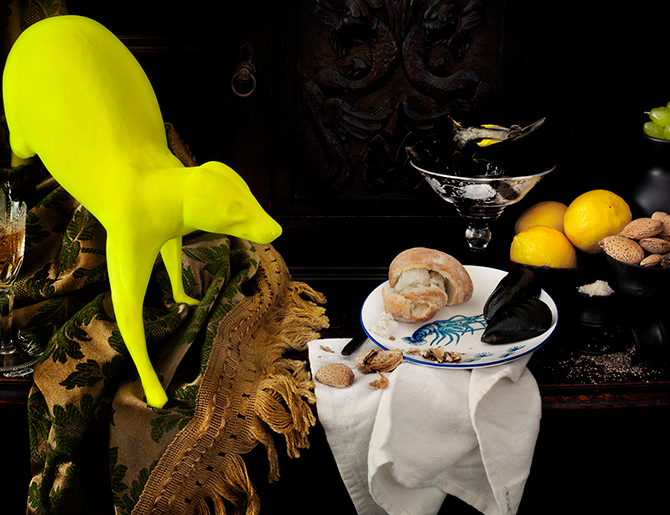 There is, however, a pronounced (and wilful) kink in these meticulously contrived displays of domestic abundance and refinement. High-density foam bodies, more usually used in taxidermy work, crash into the frame in all their disconcerting and visually jarring glory. “These lovely, chemically smelly, amorphous polyurethane shapes (wax-coated for protection from their intended hosts’ chemically enhanced pelts) suggest the fully-formed whole, the ‘real’ animal. The forms are simulacra in search of their own unique place in the world, awaiting an arrangement befitting their unnatural state. They present as ‘ghosts’, an artifice of nature. Despite this they are themselves boldly seeking a new place in a reconfigured world. Quite heroic really …”, Taylor remarks. “When I look at a seventeenth century Dutch still life painting of a breakfast setting what I see is at once aesthetically beautiful, but is also likely to contain a yellow fluorescent possum scrambling up the table. In many ways the work is about the slippage of meaning. When I reconstruct the works in my mind’s eye it’s only then I can take the time to deconstruct exactly what has played out at first glance”.
In subverting this artistic paradigm, Taylor alludes to a number of native species and floral emblems, grounding them firmly in the Australian vernacular. Taylor lives in a rural area on the Fleurieu Peninsula in South Australia, which perhaps informs the more subtle references to sustainability, land management, threatened species, and environmental issues discernable within his work. “There’s a space where the city butts up against the country resulting in an irreconcilable clash. This overlapping state where the natural meets the man-made is inherently dysfunctional and always will be, like a war zone without a war, but it’s one that throws up so many possibilities for re-imaging our relationship with the natural world. It’s quite a violent place in an oddly quiet way. You need to be respectfully cautious to navigate each day”.

Human attempts to dominate and impose order on an unruly and uncooperative natural world, to control and shape it to our will, have been revealed as ultimately futile in many instances. In contemporising a somewhat moribund European painting tradition, Taylor engages with this uneasy and contested space, “My work is centred on notions of disquiet captured within, and potentially caused by, photography. My initial impulse was to create beautiful works that reinfuse the visual with meaning through a form of emotive thinking … Still life painting has become clichéd in a sense, in that we absorb the visual tropes over time without actually thinking about them too much. But they are still relevant and beautiful celebrations of our existence wrapped up in the paradox of a finite consumption not envisaged when they were created. It’s that paradox that I find is at the crux of everything. Without a death there is no beauty, and that’s as it should be”.

Apparently, there are further layers of bewilderment associated with his works that Taylor did not intend, “Many people who see the work for the first time think they are photographs of paintings, photographs of photographs, or simply photo-realist paintings full stop”. Rather than finding this frustrating, the disconnect and ambiguity is in keeping with Taylor’s philosophy about photography, both as an art form, and as an applied process. “In the eyes of most people, photography is inextricably linked with the truth, but the truth couldn’t be farther from itself in this instance. Photography is a construct. The visual interpretation of time through a machine at the whim of our interventions. Photography has less to do with truth than any other visual medium. It fractures time, and yet it is the only true measure of time. And that hurts my brain, and hopefully other peoples’ too!”

One afternoon you rock up to your hospo job with a hangover, only to find that it’s closed its doors indefinitely and suddenly you’re unemployed again. With fuck all in your savings account, you decide to drown … END_OF_DOCUMENT_TOKEN_TO_BE_REPLACED

This year the festival will stage an online version of the event, accompanied by a program of online seminars and events throughout the Festival period. The festival will then work to present a scaled-back physical … END_OF_DOCUMENT_TOKEN_TO_BE_REPLACED

And just as the zombie apocalypse kicked in, I quit my job. I’ll tell you why later in the piece. So, now I find myself unemployed at 50, in the middle of a pandemic. This is … END_OF_DOCUMENT_TOKEN_TO_BE_REPLACED

Art and technology are by definition divorced from nature. Art is the product of human creativity and technique; it is an object, image, sound or movement that exists as a unique manifestation of our imagination. Technology comes … END_OF_DOCUMENT_TOKEN_TO_BE_REPLACED

This inaugural festival will see over 100 street artists and musicians take over Melbourne’s iconic multi-level warehouse, The Facility, transforming it from top to bottom with paintings, … END_OF_DOCUMENT_TOKEN_TO_BE_REPLACED

Rolled into Alice Springs, literally: a strong head wind burnt up all the petrol. As the sun set in the west (I presume it was the west because that’s where the sun sets where I … END_OF_DOCUMENT_TOKEN_TO_BE_REPLACED

Have you had any lessons? The enquiry came from a woman and her friend who had been loitering behind me as I painted en plein air in a local park. It seemed a particularly stupid question, especially … END_OF_DOCUMENT_TOKEN_TO_BE_REPLACED